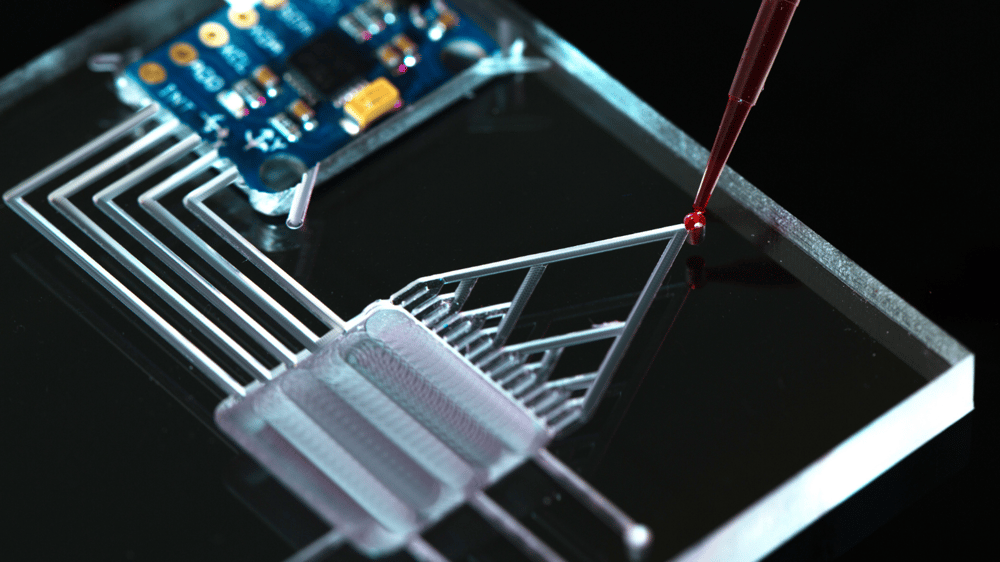 Microfluidic chips may be tiny, but these devices perform a big job in healthcare. These mass-produced “lab-on-a-chip” devices perform chemical analyses of extremely small volumes of fluids.

A typical microfluidic chip may have multiple unique micro pathways isolated from one another for liquid media passage, sampling, and analysis. Most are manufactured using injection-molded polymer layers which are laminated, or bonded, together to form tiny, sealed pathways.

These pathways are sometimes only a few microns wide and deep. Once the chip is placed within an analytical instrument, it can be challenging to detect defects and performance issues that will impact results.

Leak and blockage testing is typically carried out with either regulated compressed air or nitrogen, or a vacuum using the single-channel (often multi-port sequential) Sentinel Blackbelt or multi-channel concurrent Blackbelt Pro instruments. Nitrogen is used in cases where there are certain purity requirements. The choice of compressed air vs. vacuum depends upon whether the chip will be pushing a fluid with positive pressure or drawing it with a vacuum. A single instrument can be used to perform both the leakage and blockage tests.

A proper seal is required for the test. Each of the chip’s pathways are mated to a separate test port of the Blackbelt or Blackbelt Pro instrument and any outlets are sealed to atmosphere. This is typically done using custom fixturing built by CTS.

Then we proceed with a pressure decay leak test cycle. The test instrument pressurizes each chip pathway separately in sequence for a user-defined Fill time.

Test pressure is measured by the instrument’s pressure transducer and compared to min/max limits to enable detection of improper pressure supply or gross leaks on the pathway.

Tip: If performing concurrent testing using Blackbelt Pro, adjacent pathways inside the chip cannot be tested simultaneously with the same pressure as pathway-to-pathway leaks can be masked.

Once the test instrument’s Fill timer expires, the isolation valve inside the instrument closes. Pressure is trapped inside the chip’s pathway for a user-defined Stabilize time. This is intended to minimize the natural pressure loss of even non-leaking parts due to expansion or creep, adiabatic thermal effect, and potential absorption, to increase the separation of the final measured pressure loss/decay between good parts and rejects.

The pressure is also measured by the instrument’s pressure transducer and compared to min/max limits to detect slightly smaller but still gross leaks on the pathway being tested.

After the Stabilize timer expires, the pressure transducer is tared, and the resulting pressure loss is recorded over a user-defined test time and then compared to min/max pressure limits to determine whether there are any fine leaks.

This test follows from the same preparation and method as the pressure decay leak test for fine leaks but using a mass flow test, which can be done with the same Blackbelt or Blackbelt Pro instrument.

Once the Fill timer expires, the test instrument’s mass flow transducer is introduced to the circuit. The flow through the chip’s pathway is permitted to reach a stable value, as measured in standard cubic centimeters per minute (sccm) or standard liters per minute (slm).

The final flow value is recorded and compared to min/max flow limits to determine whether some degree of blockage is present. Tests are repeated with each chip pathway, mated to a different test port, until all are tested for blockages.

Tip: A rapid pressure decay test can also be used as a lower cost option to detect only complete or near complete blockages.

Millions of sophisticated medical devices are leak and blockage tested using CTS instrumentation and know-how every year. Are you leak testing microfluidic, or other medical devices? Contact us to discuss the most efficient and trusted test methods.