Is a leak rate required for pressure decay testing?

A common question we hear is whether a volumetric leak rate, such as standard cubic centimeters per minute (sccm), is required to carry out pressure decay leak testing. The short answer is no. But while it’s not mandatory, it may be helpful to have.

First, let’s revisit how a pressure decay test works. The part under test is pressurized (i.e. filled with air or evacuated until it reaches a set pressure or vacuum), then isolated from the supply pressure. The pressure within the part is then monitored using a pressure sensor. As the air leaks out, the pressure drops. The leak rate can then be calculated based on the change in pressure over a certain period of time. 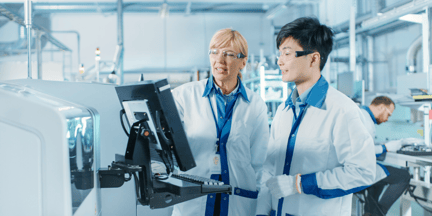 A significant number of users, particularly those that perform medical device testing, test only to a pressure change or pressure decay result. In these cases, they elect not to do an empirical study to determine what air volume leak rate results in issues with their part.

Instead, they execute a simple design of experiments (DOE) that trial various timer settings to achieve highly consistent final pressure decay values on a given part or small sample of parts. They then fix those consistent timer settings and test a number of known good parts (10 to 10,000) and develop a distribution curve of results that yield both mean and standard deviation values. The user may choose reject limits around anywhere from three to six times the standard deviation value. In essence, they have classified “typical” good parts and set a window around that.

In contrast to a pressure change that is measured internally within the part, leak rate is the volume of air that is actually exiting or leaving the part. Despite this distinction, the method of test is exactly the same between these two techniques when using the pressure decay test method.

Converting from a pressure loss reject limit to a leak rate, once a target leak rate is selected, is quite simple.
It starts with using a known, non-leaking part, and effectively teaching the leak test instrument the volume under test with no leak present. The instrument memorizes this decay value from a typical non-leaking part and enters that into memory as zero sccm.

We then retest, using the same known non-leaking test piece, along with an NIST-traceable certified leak of a known value in sccm. The instrument is given this certified leak value and when it executes the next test, it memorizes the additional decay that leak standard is responsible for.

The system now as two calibrated points – zero sccm, and, ideally, if the leak standard was built near the leak limit for that part, the leak limit threshold itself in sccm.

Why it’s better to implement a leak rate

There are multiple reasons.  It is important to remember that based on the Ideal Gas Law (PV=nRT), the pressure change of any given test is supremely dependent upon the pressurized volume being tested.

Therefore:
If using a pressure measurement, this may mean that the reject limits of the tests need to be reset. For leak rate reject limit applications, on the other hand, the user simply performs a new two-step program calibration to teach the instrument the new pressure decay/change values.

If the user were rejecting a pressure-change value only, logic dictates that they repeat the DOE to determine a new reject pressure change limits based on the altered volume in the test circuit. Contrast this to the user who has implemented a leak rate reject spec who simply needs to re-teach the instrument the new volume under test to achieve the same failure criteria they had on the manual system.

If you want to learn more about the nuances of leak testing, download our latest guide, Leak Testing 101: A Primer, or contact us with any questions you might have.