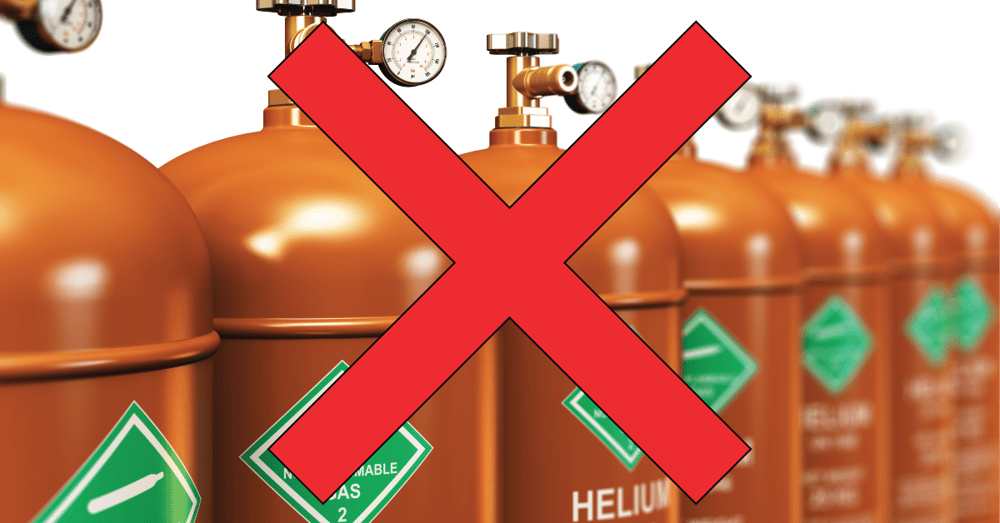 For trace gas leak testing, helium has ruled for years. It’s inert, has a very low presence in ambient air and its atomic size makes it ideal for detecting the smallest leaks.

But helium is becoming increasingly expensive and difficult to source for industrial applications. It’s a common misconception that helium cannot be manufactured and can only be sourced from where it exists in nature. It can be – it’s just expensive to do so. These cost and supply challenges have manufacturers seeking alternatives.

Forming gas as an alternative to helium for leak testing

One of these alternatives is forming gas – one of the most common gas mixtures available for a range of manufacturing and industrial applications. Forming gas is cheap and plentiful. Anyone can purchase it by the tankful at welding supply stores.

Forming gas is a mixture of hydrogen and nitrogen, typically in a ratio of five to 95 percent.

When I talk to people on the plant floor about using a hydrogen/nitrogen mixture as a trace gas alternative to helium, they often get concerned because of hydrogen’s flammability, even though they think nothing of using forming gas for other applications.

Hydrogen is extremely flammable and explosive – at the right concentration. What is that concentration? A quick Google search yields answers ranging from as little as four per cent to as high as 74. It depends on variables, such as oxygen concentration.

In the typical factory setting, the answer is 5.8 percent. Like I said, the typical forming gas mixture contains only five per cent. That difference is substantial enough to offset the flammability risk. After all, when those tanks of forming gas arrive in your facility, are they not labeled green, deemed as safe and inert as your helium stock?

In the MSDS data sheet on hydrogen mix forming gas, the chief safety hazard identified is that old standby of “contents under pressure; may explode if heated.”

How to overcome challenges of trace gas leak testing with hydrogen

That’s not to say that trace gas leak testing with hydrogen doesn’t pose challenges that helium does not.
Using hydrogen in a vacuum for trace gas leak testing is challenging because the metals most commonly used to construct the test chamber (e.g. stainless steel) outgas the large amounts of hydrogen absorbed during the manufacturing process. This can create such high levels of unstable background that detecting small leaks becomes impossible.
Utilizing current best practices and implementing CTS’s Nitrogen Purge patented technology for achieving a reliable and repeatable leak test, combined with modern data analytics and digital controls, can effectively compensate for and control this undesirable background contamination. If the test environment is kept free of hydrocarbon-emitting sources (e.g. natural gas-powered forklift trucks) forming gas is an excellent alternative to helium.

Helium remains the best option versus hydrogen for detecting the most minute leaks. But not every leak test scenario requires a trace gas with low-level leak testing characteristics such as helium’s. Due to its cost and supply issues, manufacturers need a cheaper and easier-to-obtain alternative to helium for those leak tests that don’t require its use. Forming gas is that alternative and manufacturers should not be concerned by the presence of hydrogen in the mix. Click here to learn more about CTS’ patented “nitrogen purge” leak testing technology.

Learn more about how you can recover and recycle up to 95% of your helium with a reclaim system from Cincinnati Test Systems.