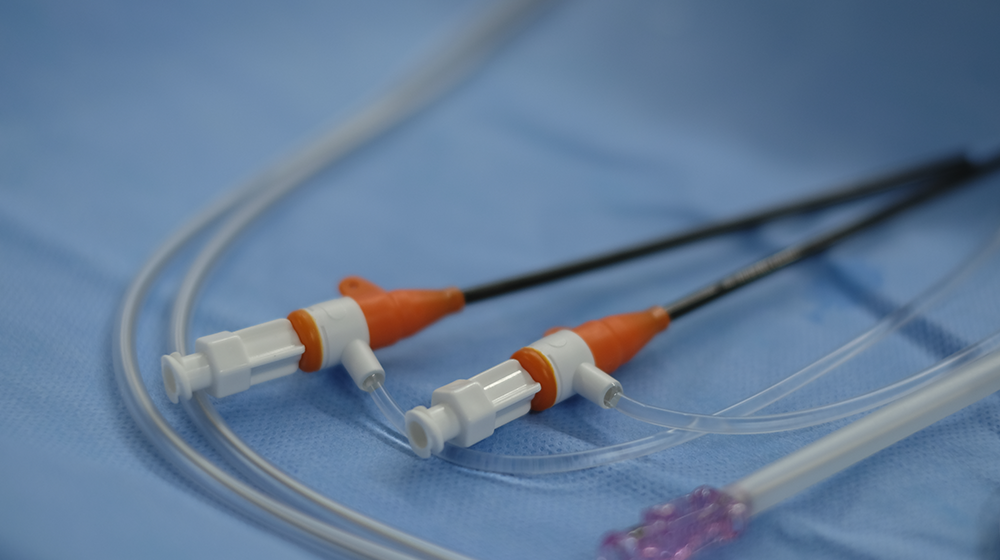 Reagent Vascular access sheaths, also referred to as sheath introducers or introducer sheaths, operate as a blood-blocking access port where catheters and guidewires can then more easily and effectively be threaded into a patient’s vasculature.

These devices are commonly designed with a molded and slit elastomer aperture at the end of the sheath that self-seals around catheters and guidewires after they are placed inside the patient, preventing blood loss. The majority also have a flush port (a manual stopcock attached to a tube) mated to the side of the device, which the clinician will use to both expel any air from the interior of the sheath prior to placement into a patient or to expel blood back into the vasculature prior to removal of the sheath from the patient.

Testing 100% of these parts in production is needed to identify any leaks or blockages that could interrupt proper, safe function in the field.

The standard test method for vascular access sheaths uses dry compressed air pressure or vacuum decay leak testing. In most cases, a basic pressure decay test is used to ensure there are no leaks with the flush port stopcock closed, and a quick “minimum loss-limit” pressure decay test with the stopcock opened to ensure there are no blockages (from excess adhesive during the production process, etc.) from the interior of the sheath all the way out through the stopcock. These tests use pressures ranging from -400 mmHg to +400 mmHg (-7.7 to +7.7 psig).

The single-channel Sentinel Blackbelt or multi-channel Blackbelt Pro pressure/vacuum decay instrumentation are perfectly designed to perform both leak and blockage testing of vascular access sheaths. The test process is as follows.

Seal the Sheath
The first step is to seal the sheath. To do this, the distal end of the sheath is placed inside a standard CTS CO31 Connect which is designed for medical manufacturing to create a tight seal around the OD (outer diameter) of the sheath’s distal tip. The stopcock on the flush port is left in the closed position, sealing the port from atmosphere, then the pressure decay test cycle begins.

Pressurize the Sheath
The CTS instrument pressurizes the distal end of the sheath through the CO31 Connect with regulated compressed air to the desired test pressure for a user-defined Fill time. The instrument measures the pressure and compares it to min/max limits to detect improper pressure supply or gross leaks on the sheath.

Stabilization: Finding Gross leaks
Fill, the isolation valve inside the instrument closes, trapping pressure inside the part for a Stabilize time (set by user). This is to minimize the natural pressure loss of even non-leaking parts due to expansion or creep, adiabatic thermal effect and potentially absorption, increasing the separation of the final measured pressure loss/decay between good parts and rejects. The pressure is also measured by the instrument and compared to min/max limits to detect slightly smaller but still gross leaks on the sheath.

The Sentinel Blackbelt enables multi-port sequential testing so that you can test multiple chambers as part of a programmed test. Learn more about the Blackbelt.

Test: Detect Fine Leaks
After stabilization, the pressure transducer is tared, and the resulting pressure loss/decay is recorded over a user-defined Test time and compared to min/max pressure limits to determine whether fine leaks are present. The pressure trapped inside the sheath is then released.

The Test sequence typically pauses at this point so that the operator can manually rotate the stopcock to the vented position where the flush port is now open to atmosphere. The minimum loss-limit pressure decay flush port blockage test cycle is then set to begin. Note: CTS can also automate this process by building a pneumatically rotating custom nest. Read the application note to learn more >


Flush Port Blockage Test
The sheath is again charged with pressure, usually the same as used for the leak test. The Stabilize time is set to a bare minimum value of 0.05 seconds to minimize pressure losses through unblocked parts. After stabilization, the pressure transducer is tared, and the resulting loss/decay over a fixed time is recorded and compared to min/max pressure loss limits to determine whether the flush port has a total or nearly total blockage. Test time is short, generally between 0.1 and 1.0 seconds, to permit intentional loss of between 50-80% of the initial starting pressure seen during Fill time when testing unblocked parts.

At the end of the Test, the pressure trapped inside the sheath is vented to atmosphere. The variable test result data is then displayed along with a clear pass/fail indicator on the CTS testing instrument.

Do you want to learn more about leak or blockage testing for disposable medical devices? Register for our upcoming webinar on February 23rd. 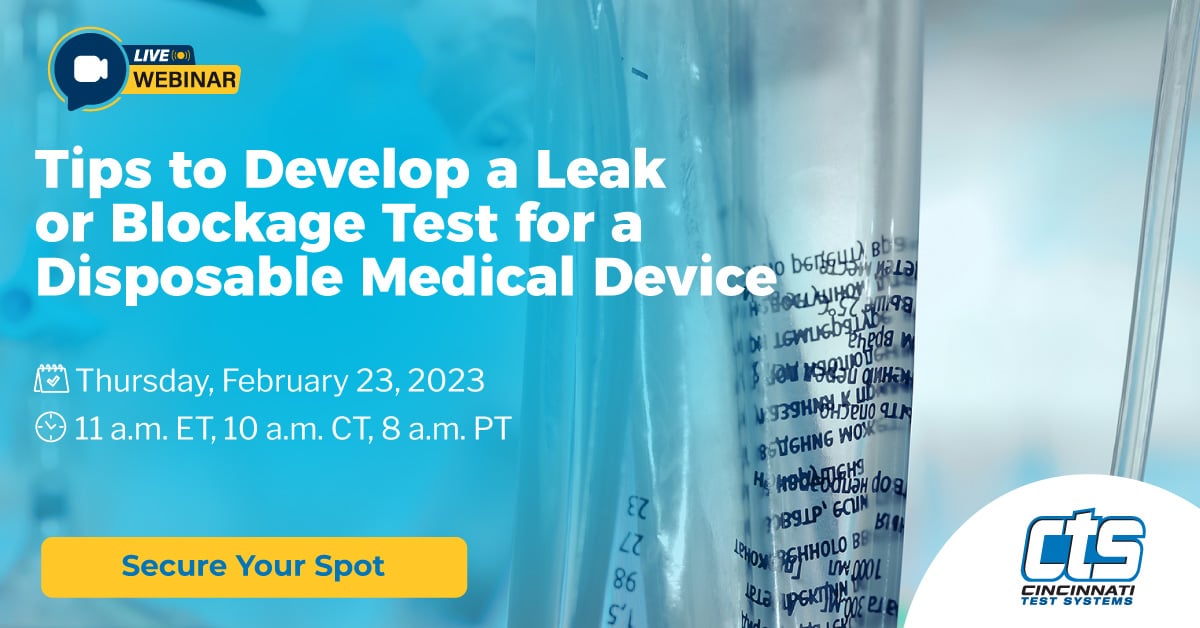 Need For more detail on this testing process, and how to use leak rate to simplify testing across sheath variations, read our application note >