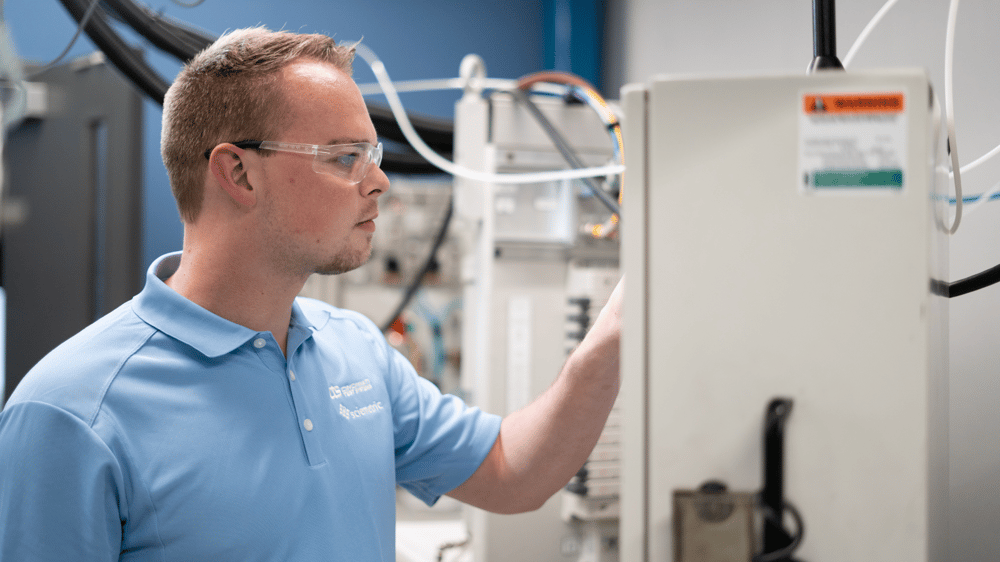 For those new to leak testing on the manufacturing line, the different technologies and methods can seem daunting. How do you choose the right kind of leak test for your application? How do you know if the method you’re using is producing the best results?

These are questions we will help you answer in this blog post. Below, we explore some of the most common types of leak testing you’ll encounter on your line, and the pros and cons of each for different applications.

The most basic type of leak testing is the submersion or dunk test (also referred to as bubble testing), in which you pressurize the part, submerge it in water, then look for gas bubbles. Most commonly, compressed air is used for dunk testing and will test the part at various pressures and time frames. The size and frequency of bubbles both signify the size of the leak. You can also become scientific about this measurement by submerging a graduated cylinder and collecting bubbles over a 60 second time period. The amount of displaced water from the cylinder identifies a volumetric flow of air over one minute (mL/min).

Pros: This is a simple, cost-effective method for basic detection and leak location.

Cons: Visual dunk testing is not precisely measurable and very dependent on the operators. You can guess the leak rate based on bubble size and frequency, but it does not provide exact metrics. So, for applications that require precision in leak rate measurement, this is not a good option.

Pros: The test is fast and highly accurate, and it can be calibrated to a leak standard for standardized volumetric flow measurement.

Cons: This test does not identify the source of leaks and can be slow for large parts with low leak rates. Additionally, testing large parts may take significantly longer because of decreased changes in pressure.

Pros: Vacuum decay testing is as sensitive as pressure decay testing and has similar precision. It is also less susceptible to changes in environmental conditions, making it a good option for leak testing applications where temperature control, etc., may be a challenge.

With mass flow leak and functional flow testing, you pressurize air into a part and measure the rate of flow going into the part as it is held at constant pressure to determine the leak integrity of the part or identify blockages.

Pros: Mass flow testing is a non-destructive leak test, ideal for large leaks, restrictions in part channels, and blockages (such as when testing medical catheters or tubes)—leak test applications that can be challenging for manufacturers.

Cons: The sensitivity of this testing is sometimes too low for smaller leaks. Also, the accuracy of the readings is highly dependent on the flow meter measurement range, test air cleanliness, and system supply pressure stability.

This technology does not require calibration to a master part and is suitable for laboratory use and testing products on an assembly line that has a large amount of part to part volume variances.

Pros: Trace gas testing is not affected by temperature or pressure changes occurring inside the part, making it ideal for applications where parts are tested at inconsistent part-to-part temperatures and low-level leak rates are necessary.

Cons: The test’s sensitivity can be affected by uncontrolled atmospheric trace gas that creates background noise. This means you have to use nitrogen purge technology, test in a sniffer booth, or use hard vacuum mass spec testing.

Want to learn more about the basics of leak testing?

We have taken our decades of experience helping manufacturers find the right leak tests and put together a comprehensive digital guide on what you need to know.